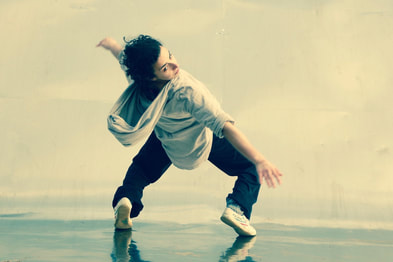 LITTLE BIG THINGS
(acrodance & partnering)
In this course we will explore acrodance through the lens of energy efficiency: working on functional ways of approaching and leaving the floor, researching how to use the momentum generated by acrobatic figures to contribute to the fluidity and continuity of the movement. We will be focusing on building momentum, bringing awareness to weight transfers, examining the inverted position (on the hands) and experiencing the main elements of the architecture of the body. We will also be exploring the main mechanisms behind the technique of "partnering"/body manipulation.
LITTLE BIg things 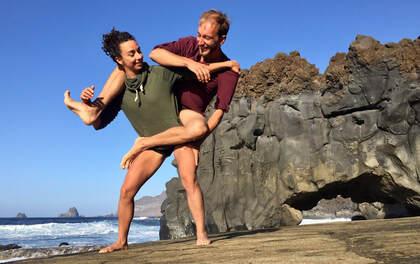 UPSIDE DOWN & ALL AROUND
(acrodance & partnering with Ana Jordão and Vincent Kollar)
In this course we will explore acro dance and partnering and experience diverse ways of approaching and leaving the floor.
Tools such as breath, imagination and emotion will help us re-discover movements and find lightness. This lightness will lead us in our path towards energy efficiency.
Balance is not a static state; balance is a constant search. We will dedicate some time to feel the movement in the stillness of the inverted position. We will share our vocabulary of dynamic handstands, with the idea of passing through the handstand. To see the handstand as a step in the journey and not as the destination.
Use the floor as your partner and let the partner be your ground. Through animalistic games we let our bodies communicate with each other. For this we need to develop our ability to listen. We believe that nowadays listening is more important than ever. With the sensitivity and intuition that we develop through playfulness we will then start to understand the physical mechanisms of partnering. Let yourself move and be moved.

In the last year I have had the chance to work with a few fascinating people on the development of their first solo pieces. Working as an 'outside eye', for me, is a journey of creating confidence and empathy with the intention that is being manifested, nurturing a free dialogue that helps to develop the concept at hand, and establishing a basic structure/foundation for working and creating meaningful material.
Basic tools include improvisation, conceptual reflection, choreographic and compositional work, movement research and some tactics derived from DasArts feedback method.
'ABSURD HERO' by ROMAN ŠKADRA
Pfefferberg Theater, June 2020
ABSURD HERO is a contemporary solo featuring the circus and performance artist Roman Škadra. The piece is an elegant fusion of the Theater of the Absurd and circus, chock-full of laughs à la Buster Keaton. With a sparse stage set dotted with a few red objects, the work reveals a dead-pan delirious drama between artist and large heavy globe. Referring to Camus' philosophy – Absurd Hero presents circus as a potentially joyful, yet endlessly futile endeavour. 'ARTICULATIONS' by ELENA LYDIA KREUSCH
WUK, Vienna (AT), March 2018
Using a video (live) stream, the performer conducts a self exploration of her body and its physical limitations — oscillating between intimacy and dissociation. Making use of the the screen's ability to betray the eye and (re)frame the body, a subtle play with editing, delays and special effects is used to gradually blur the lines between reality and distortion. WATCH TRAILER
'IN COGNITO' by PERSONA NON GRATA
Paris and Ghent, October 2017
'In Cognito' proposes a representation of the rising aggression and the need for anonymity in today's (protest) culture – a meditation on defense versus attack and violence versus pacifism explored through body and object manipulation.
Pondering masks. Invisibility in action. Surveillance of the self.
'In Cognito' is the first part of a series of performances under the project named 'Persona Non Grata' by Gustav Hjerl, a project which aims to portray various disenfranchised and oppressed characters, seeking social, political and spiritual relevance as a reaction to the current climate while simultaneously emphasizing the importance of focusing on and believing in something bigger than oneself. Watch trailer
'SPUREN DER VERGÄNGLICHKEIT' by SINA NIKOLAUS
Zirkusquartier, Zürich (CH), January 2017
"Wherever we go, a part of us stays there, the traces of our footsteps, they don't leave any more." A colourful journey into memory landscapes, created and Performed by Sina Nikolaus.
Music by Arnaud Duvoux