A BODY AND OTHER OBJECTS

Ongoing creation 2022-2023
For conventional and unconventional indoor spaces
Duration: +- 50 minutes
Supported by GVL / NEUSTART KULTUR Stipendienprogramm and Fonds Darstellende Künste #takeheart
"A physical object is a collection of matter within a defined boundary in three-dimensional space."
A BODY AND OTHER OBJECTS is a participative performance which explores the body as “matter”, as “object”, as “container”. It aims to inquire into the qualities of this container, questioning the existence of hermetic borders. Through the objectification of a body it aims to create a platform that embraces the diversity and the ambiguity of the self, of nature and of the universe.

What does one body hold? What is my skin a container for? How can I objectify my body and how can an object become a subject? What permeates through the skin's membrane? What do I gather in my so-called 'self'? How much diversity is held in one (apparent) singularity? Is the world made of separate things or just infinite spectrums?

These questions will be explored through movement (dance / acrobatics / hair-hanging), use of objects, and materials (rock salt), installation, live music, and audience interaction. 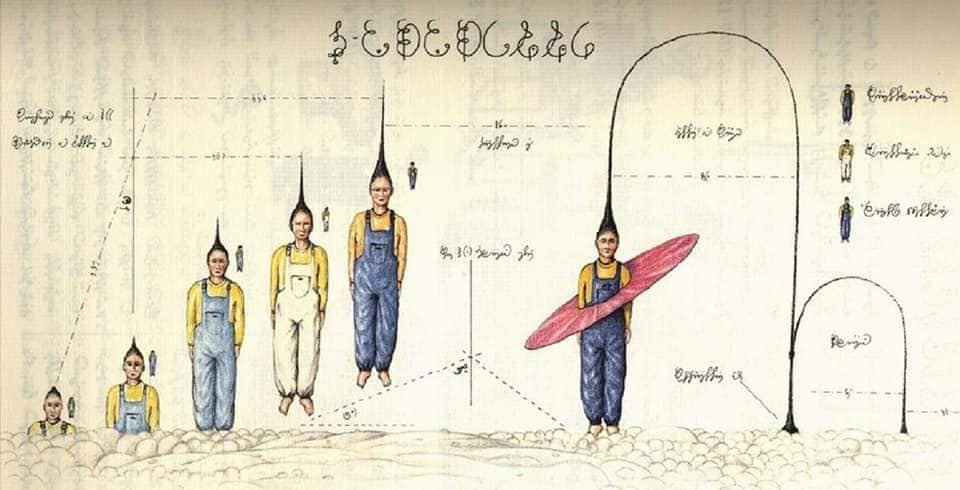 I have recently started to practice hair-hanging.
My first experience of the physical sensation of "hanging" was incredibly thought-provoking. While delivering my 50kg to this single hanging point I became hyper aware of my whole SKIN as a membrane, an envelope, a CONTAINER for "all" of my (physical and non-physical) self.
As I continue to develop this new skill, I have a deep curiosity about exploring different ways in which I can create a sense of connection through allowing the audience to participate in this act : I envision a hair- hanging installation in which a body is in counter-weight with a huge container filled with rock salt.

The rigger drags my motionless body onstage, pulled by a sling attached to my hair. My body is dropped on the floor. My hair (hair-hanging) is then connected to a container through a counter-weight system. The participants are invited to fill this container with salt (a big pile of rock salt is in the space) until my body is fully suspended and I start to move, spin, etc. Apart from playing with the relationship between performer and audience (possibly emotional due to the inflicting of pain), with this installation I also aim to address the relationship between body and object, placing them (body vs. pile of salt) as equals is terms of value and agency and by letting the audience ‘manipulate’ me. 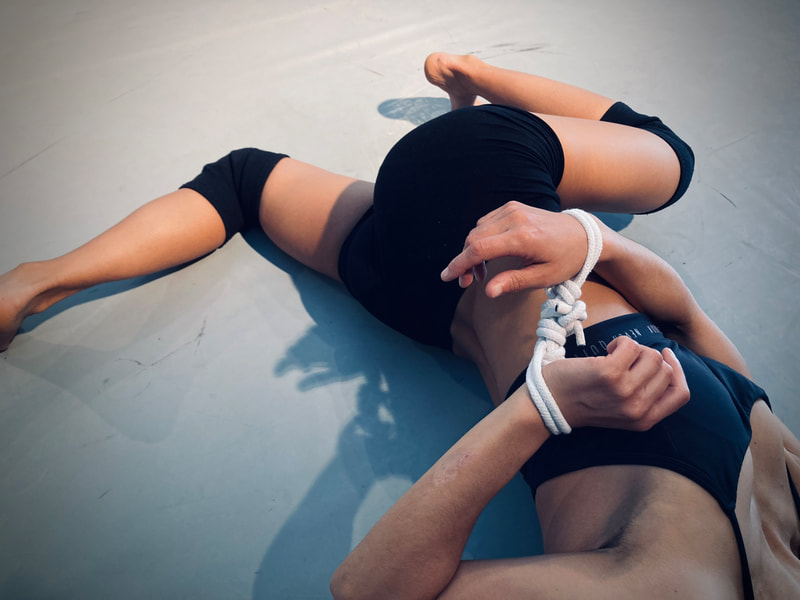 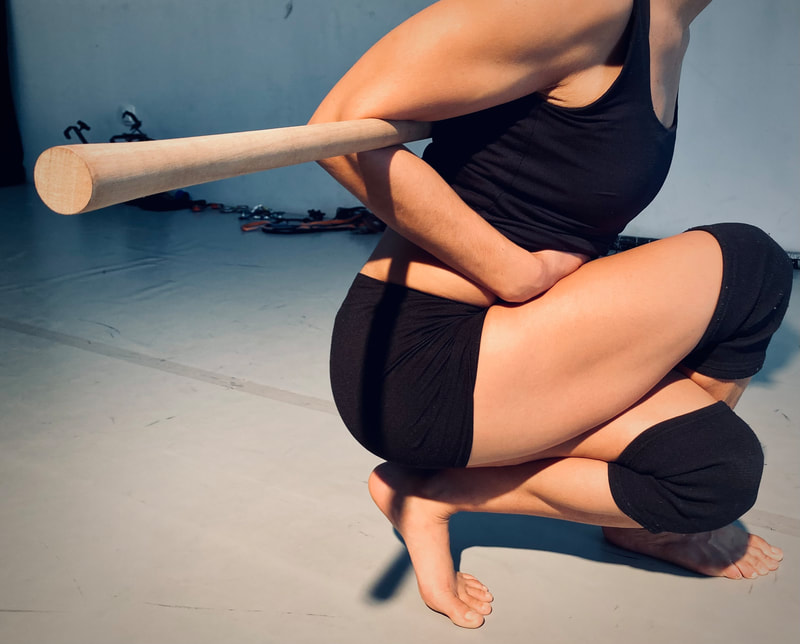 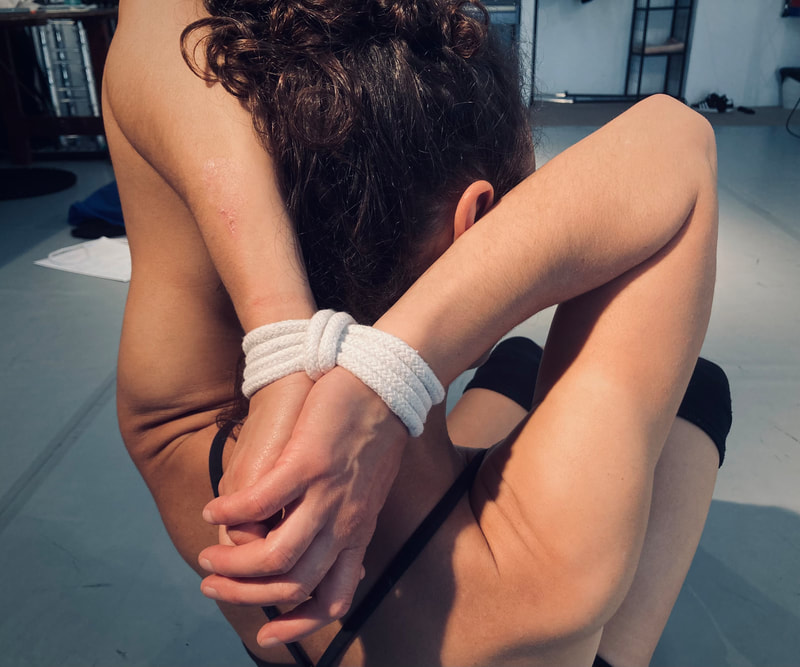 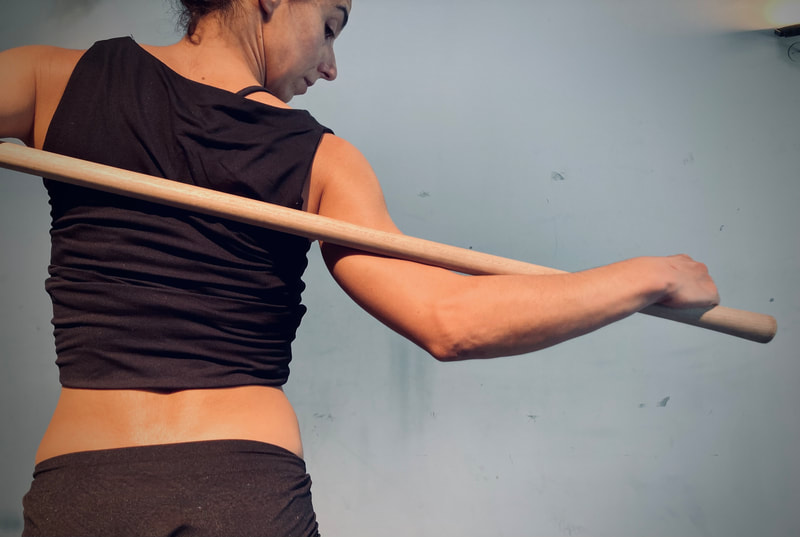 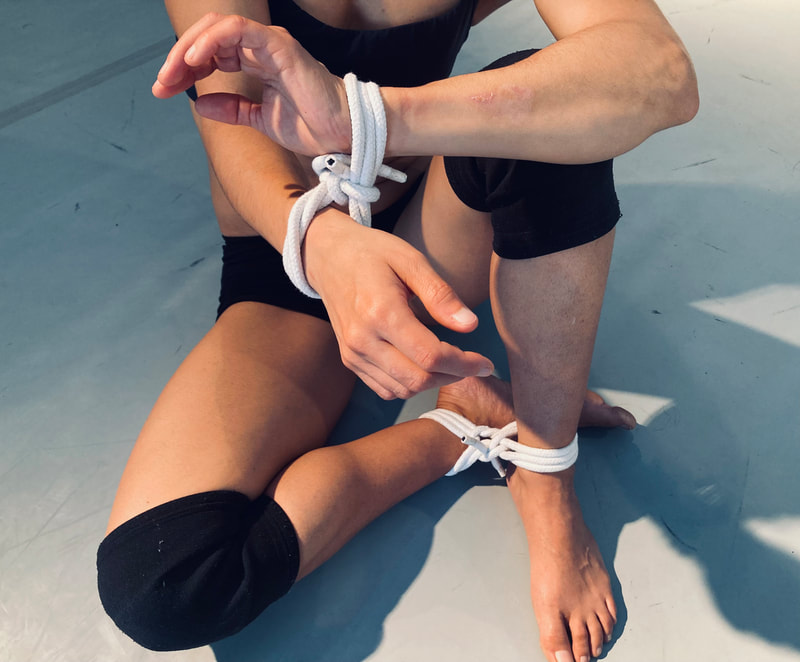 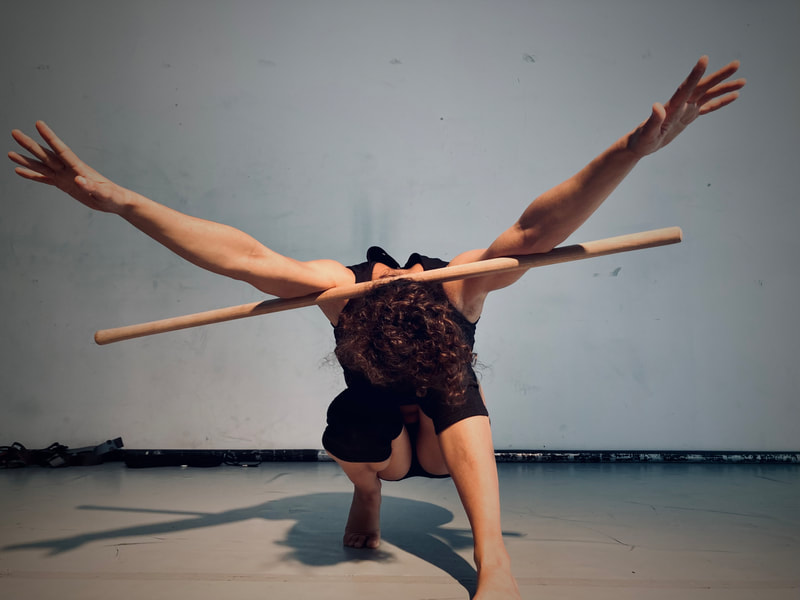 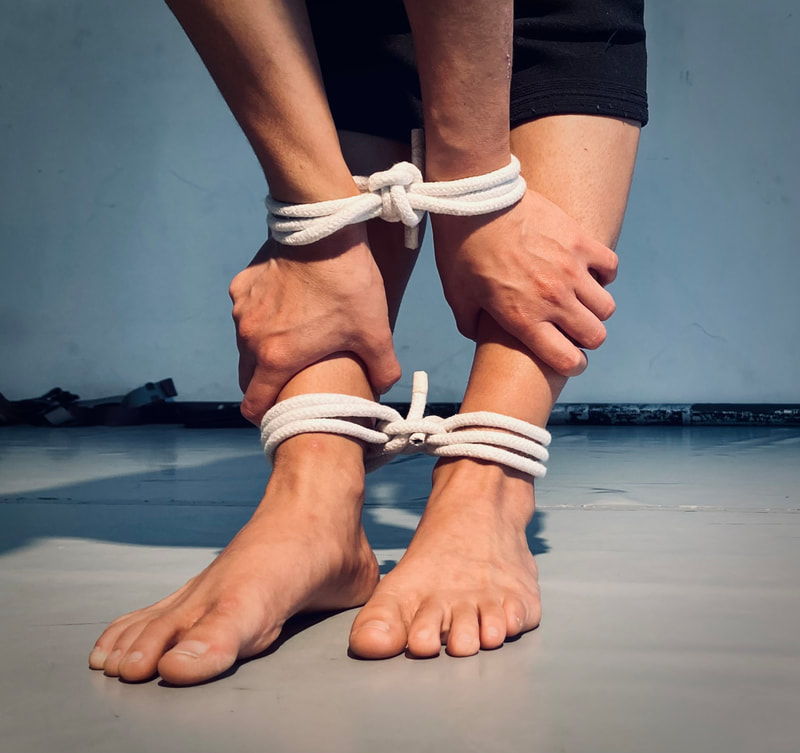 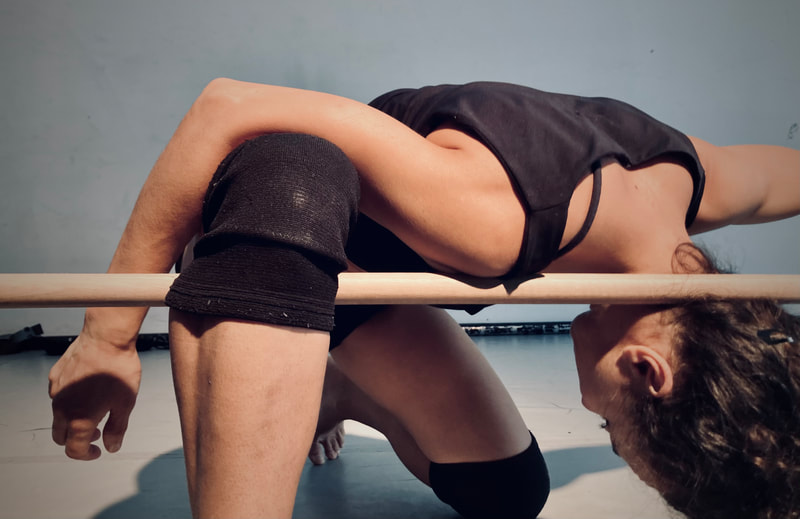 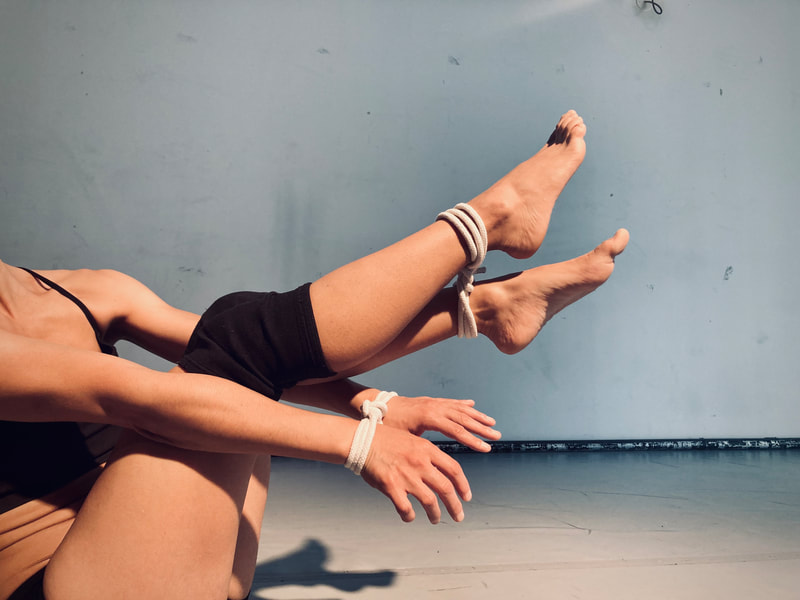 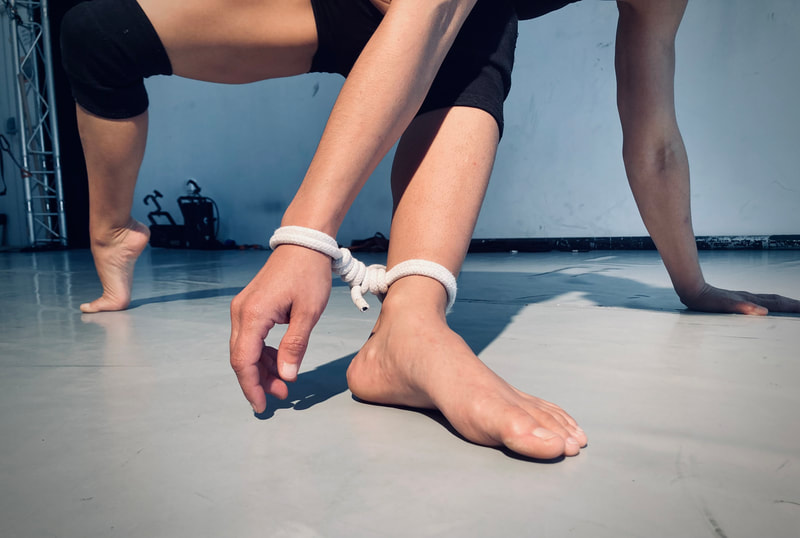 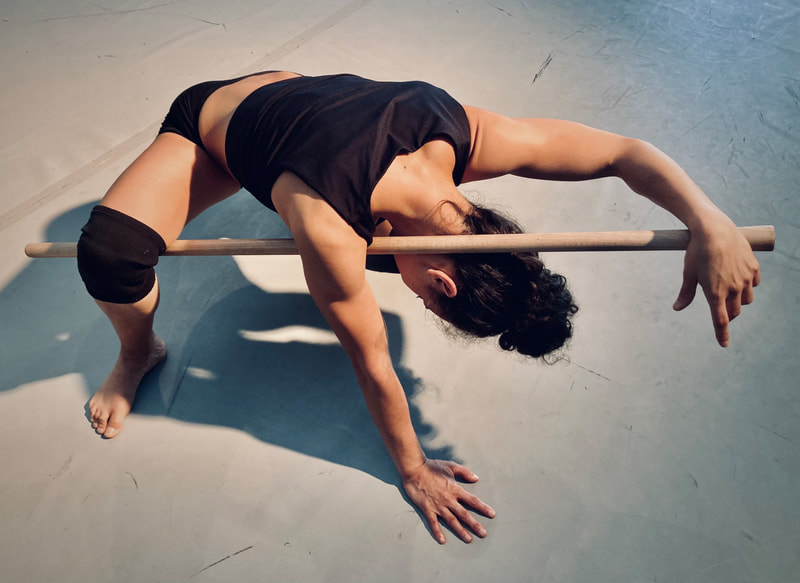 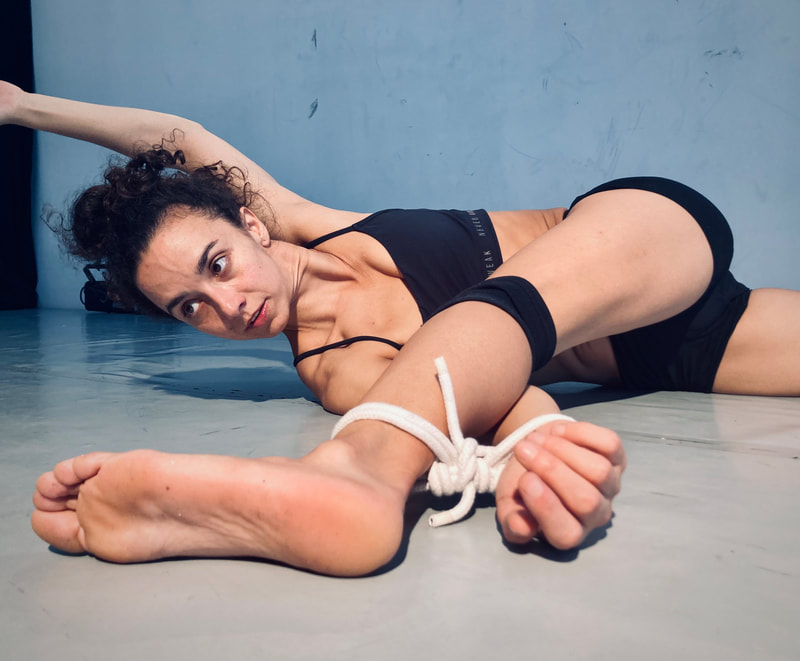 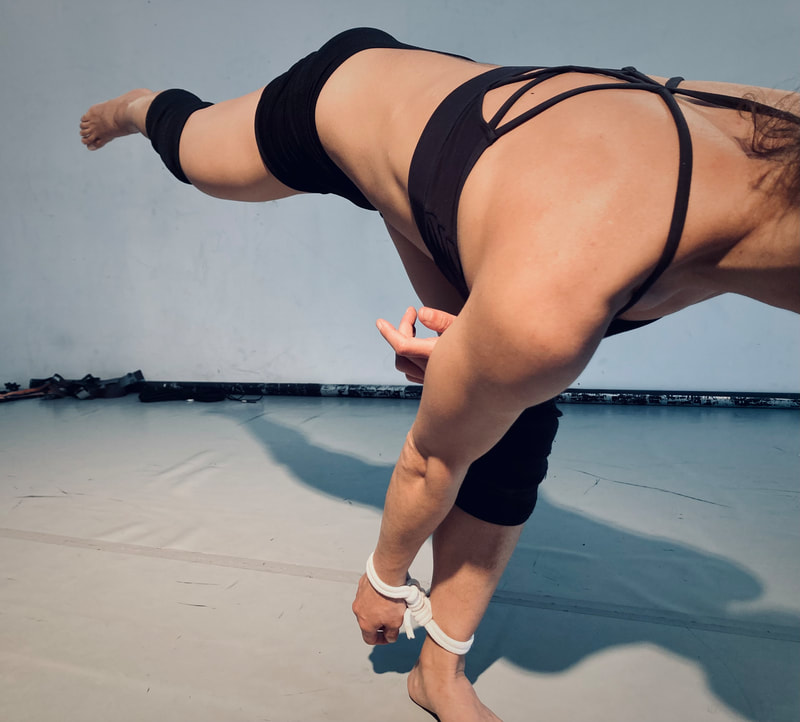 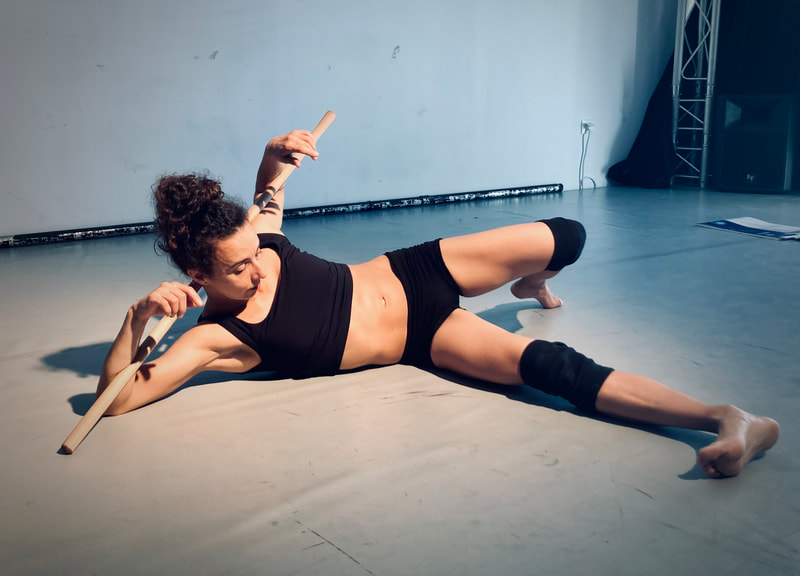 Hair-hanging is a “situation” in which I experience both a LIMITATION, but also a huge FREEDOM (flight, weightlessness).
This circumstance also highlights a certain objectification of the body (it hangs like an object). The fact of being “hung” effects the level of agency of the BODY, making it similar to an OBJECT. Furthermore, the sensation of being contained by my SKIN also opens up to a sense of MULTIPLICITY (the diversity and complexity of who I am) within the UNITY (one single body). Similarly, the SKIN is a site for exchange, permeability, trade and communication. It is both a BORDER of my physical body and yet it is also PERMEABLE.
All of these observations point to a sense of AMBIGUITY or PARADOX. Thus, the research will have as a starting point the focus on the COEXISTENCE of the inherent qualities of the practice of hair-hanging: body and object, limitation and freedom, unity and multiplicity, border and permeability.
These will be observed through the lens of PARALOGICAL THINKING (the coexistence of opposites). Reality is fundamentally paradoxical; paralogical thinking sees reality from two opposite yet complementary perspectives at once, and arrives at an understanding of the ‘paradoxity’ of what is being examined. Logical thinking is “either/or” thinking, whereas paralogical thinking is “both/and” thinking. This means we can’t understand the depths of reality with either/or logical thinking. Paralogical thinking allows us to see that something can be both this and that, depending on how we look at it. Through this perspective, the research process will thus dive into the exploration of different ways of both framing and blurring these concepts.

PARALOGICAL THINKING: This research examines the practice of hair-hanging (traditional circus discipline) through the lens of paralogical thinking. It observes the coexistence of seemingly contradictory concepts of the practice, such as body vs object, limitation vs freedom, multiplicity vs unity, border vs permeability, and dives into the exploration of different ways of framing and blurring the borders between these concepts.

DIALOGICAL PROCESS: I claim the research process and the performative space as a space for dialogue, for conversation, for “assembly” (Timothy Morton). I am interested in finding subtle ways to blur the borders between performer and audience; installing trust and inviting people into the performance, making it open, fluid, relational. Furthermore, As part of the creation process, I will be in close contact with a network of artistic collaborators who continue to deeply inspire me, to support and deepen my reflection on the themes which arise in the work. Their participation will be acknowledged and credited, verbally and in writing.

ASSEMBLAGE: assemblages are composed of heterogeneous elements or objects that enter into relations with one another; a multiplicity.Gathered texts (concerning a variety of issues ranging from politics, to philosophy, to ecology, activism and social justice) will serve as starting points for textual material. The diversity of these texts will create a sense of "FIELD" or "ASSEMBLAGE" (coining the term from Deleuze and Guattari). Spoken and recorded texts of my own writing will punctuate the performance and create the bridge between performative modes and more open participative modes of interaction.
Also, as with most of my works, there an interest in mixing things (formats, ways of thinking, ways of showing, ways of making). I am fascinated by the in-between-ness... of forms, spaces, languages, interactions, etc. This piece will be an expression of these interests.

RHIZOMATIC APPROACH: coining the term from Deleuze and Guattari, which describes the way that ideas are multiple, interconnected and self-replicating. A rhizome has no beginning or end... like the learning and research process

TENDERNESS MANIFESTO by Zoe Todd
Zoe Todd's work seeks to assert an ethic of tenderness, kindness and reciprocity across all engagements and entanglements, both academic and artistic.

ECOLOGICAL THOUGHT book by Timothy Morton
"In this passionate, lucid, and surprising book, Timothy Morton argues that all forms of life are connected in a vast, entangling mesh. This interconnectedness penetrates all dimensions of life. No being, construct, or object can exist independently from the ecological entanglement, Morton contends, nor does "Nature" exist as an entity separate from the uglier or more synthetic elements of life. Realizing this interconnectedness is what Morton calls the ecological thought."

MUTUAL AID book by Peter Kropotkin
"In this cornerstone of modern liberal social theory, Peter Kropotkin states that the most effective human and animal communities are essentially cooperative, rather than competitive. Kropotkin based this classic on his observations of natural phenomena and history, forming a work of stunning and well-reasoned scholarship. Essential to the understanding of human evolution as well as social organization, it offers a powerful counterpoint to the tenets of Social Darwinism. It also cites persuasive evidence of human nature's innate compatibility with anarchist society. Kropotkin profoundly influenced human biology and was one of the first systematic students of animal communities, and may be regarded as the founder of modern social ecology.

SINGULARITY poem by Marie Howe
Introducing us to "ecopoetry" this poem is inspired by the physics that created the earth, and calls us to imagine the singularity of what we once were...

ON THE BEACH AT NIGHT ALONE poem by Walt Whitman
A beautiful short poem about how all things are connected throughout time.

HAIR by Kurt Stenn
The evolutionary history of hair, the fiber is put into context: hair in history (as tied to textile mills and merchant associations), hair as a construct for cultural and self-identity, hair in the arts (as the material for artist's brushes and musical instruments), hair as commodity (used for everything from the inner lining of tennis balls to an absorbent to clean up oil spills), and hair as evidence in criminology.